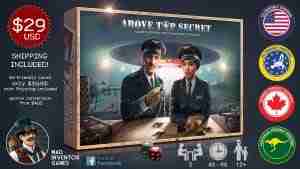 What are you playing/reading/watching right now? At the moment we’re playing Dastardly Dirigibles and Purrrlock Holmes, while catching up on X-Files and Lone Gunmen.

Who or what is Above Top Secret? Why is it important? Above Top Secret is generally considered Majestic Clearance (as in MJ12)– in our game it refers to the top level of Security Clearance which allows players to access reverse engineered and experimental technology for use as their defensive systems.

Apart from your game what should everyone be looking out for in local Australian Pop Culture? I think Dez Maggs and Ella Galang Ampongan are doing a great job of
reviewing, promoting and building awareness of Australian designed board
games.

Major prediction for Pop Culture 12 months from now? Pop Culture – probably the fusion of 3D vision and apps with boardgames, but I also predict a return to the 80’s retro, analogue, cassettes etc 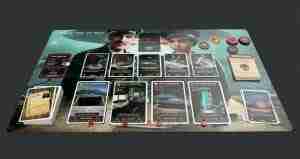 Best last thing you ate? My wife is Japanese, and makes killer food. Better than any restaurant, so she wins every time.

And that’s 5! Above Top Secret is currently live on kickstarter. You can also catch up with Mad Inventor Games on Facebook.