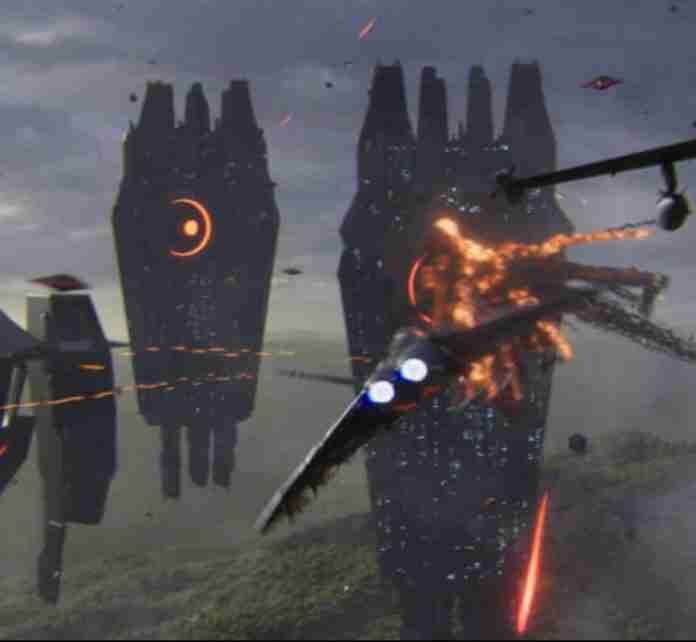 From Pacific Rim to Independence Day we all know when aliens or other dimensional creatures attack they leave Australia (usually the Sydney Opera House) for last.But with the 2018 Australian film Occupation the script got flipped with rural Australia being hit first. Now with the follow up Occupation: Rainfall in cinemas we get to the answer of what happens if Australia got hit first.

If you haven’t seen the 2018 film Occupation which is currently on Netflix it is not a dealbreaker going into the sequel with the first film serving more as a prequel in more ways than one. If you want to go watch it for yourself then probably skip this part and come back later but if you stick with us there are going to be some light spoilers to get you ready.

In the first film we meet an ensemble cast like hometown hero/AFL Team Captain Matt Simmons, his girlfriend (and Battlestar Galactica alum) Amelia or new step-dad just trying to make his way in the universe like his father before him Temuera Morrison/Peter converge on a small rural town during a fair and AFL match when Aliens attack. While the ragtag team retreats the aliens have been putting humans (including Peter’s family) in camps and with the military nowhere to be seen they switch it up from Tomorrow when the War Begins to Red Dawn.

This all culminates with a final assault, now backed up by the military, on an Alien factory/stronghold where they learn the Aliens fled their own home on the verge of destruction to take Earth as their new home. While not having much choice they also find that not all the Aliens support this hostile take over and we finish the prequel with some new allies as the war rages on.

The new film picks up in the thick of where the first film left off. Sydney being one of the last holdouts as we see a flaming and war ravaged city. Simmons is still a special ops type with some battle scars to show and his former girlfriend Amelia (now played by Gold Coast actress that you may recognise from ‘Tidelands’ – Jet Tranter) is acting as a sort of intermediary alien refugee activist/military intelligence leader. As Sydney is prepared for a last attack and all forces to retreat to the blue mountains Simmons and his new best alien bud ‘Gary’ are sent on a special mission.

And that is actually all you really need to know going in as this film hits the ground running. While paced and more action film than the first film there is definitely no time for love Doctor Jones as stuff is cooking from the get go. If you have seen the first film you will no doubt notice straight away the special effects have taken a significant uptick in the new film as we see Jets and Alien spacecraft in dogfights over Sydney in the first few minutes of the film.

If we were to say the first film gave us Red Dawn vibes the new film takes more of an Iron Sky approach early on but is firmly seated in the action film genre. One of the things we did love most about this new film is how much it was Australian’d up with references to Chocolate covered Macadamia nuts and squadrons called the Drop Bears as this film goes both completely serious but still playing it up a little at the same time. There is even a few laugh out loud moments especially later in the film when Ken Jeong (Community/The Hangover) and ‘friend’ is introduced.

So should you go see it? Well, yes especially if you have a special place in your heart for Sci-Fi like Captain Sky or V: The Series. While not a huge budget Hollywood film this is still a pretty solid film and easy to see how it has scaled from that first film put together by writer/director Luke Sparke (who we interviewed in 2018) and a definite must watch with some clever twists and an entry that has the markings of a cult classic.

Occupation: Rainfall is in cinemas across Australia from today