With Deadpool 2 less than a week away we decided to go a little more spandex for this week’s CosFriday. So grab your stuffed Unicorn and say Hi to a Cosplayer who also loves to visit kids in hospital dressed as some of iconic characters, Dora the Destroyer. 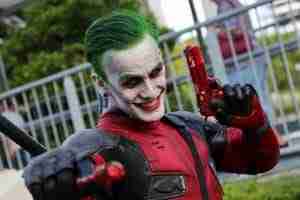 How long have you been cosplaying? 1 year.

What inspired you to start cosplaying? I’ve always loved cosplay I started going to cons just to see everyone dress up, but i became an actor/performer at MovieWorld & SeaWorld Australia doing characters like the Joker, Scooby Doo and the TMNT to name a few. I bought my costumes not long after that and fell instantly in love to the point of making my own business that visits kids all over Australia in hospital as these characters.

What was your First Cosplay? The Merc with the mouth Deadpool! What is your most recent cosplay? A crossover between Mark Hamill’s Arkham Knight Joker and Deadpool.

What cosplays are you currently working on? An Arkham Knight Joker/Batman crossover as well as a certain Teenage Mutant Ninja Turtle who loves pizza!

Who are your favourite cosplayers in the community? My number one favourite is taken by two different cosplayers. First is Amanda Vallance she did a female version of the Punisher and the other is The_Man_of_silva. Both of these cosplayers were the first I had ever met.

The first time I cosplayed was in my Deadpool costume and they came up to me asking for a photo. They were both so awesome/easy going and so friendly. I’ve had huge respect for them ever since.

Who else do you want to cosplay? I’d love to cosplay as Iron Man and a Hydra version of Captain America. 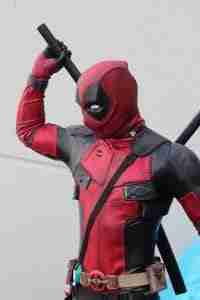 Tell us an odd fact about yourself! I’m a busy guy. Working a job, acting performing, owning a business, cosplaying AND trying hard at the gym while also training other people then there’s having fun with friends watching movies and anime. You have to find the time to have fun and I’m all about having fun!