Happy CosFriday everybody! This week we catch up with Sydney based Cosplay builder Nerdcore Creations!

What’s your name & how old are you? Dave or Nerdcore Creation or LeClubNerd, Nerdrage, Nerdcore… but we’re friends now so you can just call me Nerd. I’m fine with that. I’m 47 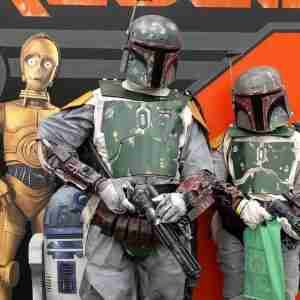 What inspired you to start cosplaying? Last year was my son’s 13th birthday and his gift was getting to go to OzComicCon so we decided if that was the go then we’d have to dress up. So I asked him what he wanted to go as and he said Boba Fett .. and I groaned as I remembered a video with Adam Savage saying something like Boba Fett was hard because it had so many individual parts.

What was your First Cosplay? Boba Fett, two of them actually one for me and one for my son. I did momentarily consider going with me as Jango and my son as Boba but then sanity took over. It was a steep learning curve, I learnt, patterning, soldering, basic electronics, magnets, casting with silicon and resin, fibre glassing, 3d printing. Adam Savage was right, Boba has a lot of different parts

What is your most recent cosplay? My most recent cosplay is Reinhardt with the ‘Uprising’ skin. It was my first build with EVA foam and I enjoyed using that. I’m a Rein main in the game, and that skin is my favourite plus it was nice not to have a helmet on but I’m doing the helmet anyway just as a display piece. 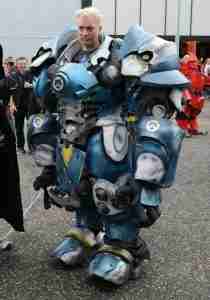 What cosplays are you currently working on? The Rein is not currently finished, the hands were temporary, and I didn’t get the lights on him yet and the strapping made him slump a bit over the span of the con so he’s getting fixed, upgraded and finished. You can walk around the garage as much as you like but you won’t find those weak points till you take it for a real test run.

Who are your favourite cosplayers (or makers) in the community? There are so many great ones Henchwench, Evil Ted, XRobots, SKS Props, MWiggs, Heroes Workshop, The Armoured Garage… so many, too many to list.

Who else do you want to cosplay? I think Winston would be great fun to do, he’d certainly be challenging or I’d like to re-do Reinhardt in full aerated PVC … but that would weigh a bit, it’d be epic though

Tell us an odd fact about yourself! I’m older than I look, I worked for Hannah Barbera and Walt Disney in the 80s.

Follow Nerdcore on Facebook or check his full Reinhardt build log page out over on RPF, and if you want to be featured in a future cosplay spotlight, hit follow and slide into our DMs