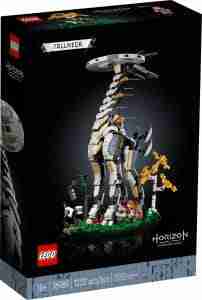 Branded Horizon Forbidden West but could just as easily be set against the first game the new set lets you build a Tallneck (the tower like creature you needed to scale to open up areas of a map) in it’s own diorama complete with a Aloy mini-fig. Set against a small round base this set is more display piece than anything but would look completely at home next to your Sonic LEGO.

Coming in at 1222 pieces this set stands around 34cm high with a round base having a 23cm diameter this set is not small but it is so pretty. There are also some customisation options depending on your preferences so that you can change the eye colours of the creatures in the set. And with this being a video game inspired set and Guerrilla Games launching Horizon Forbidden West this week there is even a trailer.

The Horizon Forbidden West Tallneck set will be available from May 1st and will retail for $129.95 AUD. Which gives you more than enough time to finish the game before you can put the controller down to build this.