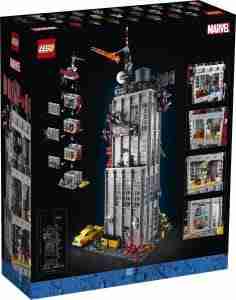 Listen up web-brick-heads because overnight LEGO dropped the Ultimate Spider-Man related set in what is currently) the tallest LEGO set ever release – The Daily Bugle. Announced last night and with an ETA of very soon, why do you want this set? Let us explain.

As mentioned this is the tallest set LEGO has ever made as a released product. Standing at 82cm tall it is more than double the height of LEGO Lion Voltron who again was 10cm taller than the Sanctum Sanctorum (which did come with a Daily Post newspaper box). Coming in at 3772 bricks to assemble the Daily Planet is more than a front facade with the building being fully enclosed front and back, meaning it would not look out of place next to your LEGO modular buildings.

The set being enclosed does also mean there are removable sections to allow you access to meme-worthy scenes with multiple offices + the bullpen available allowing you to reproduce most any scene from Spidey’s long history at the Bugle. This includes in and outside with the outside of the building allowing for mounting of Goblin Gliders, Swinging Web, Mechanical Claws, Symbiote Tendrils in addition to the ground floor with a back alley dumpster, newsstand and yellow cab for the street.

The set itself will be available to LEGO VIP members to order from May 26th with everyone else having to wait until June 1st to pay the $499.99 AUD price tag. But considering how much is in this building that price tag shouldn’t come as a shock because with great LEGO comes great responsibility.

The LEGO Daily Planet will be available from LEGO.com and specialty LEGO stores.