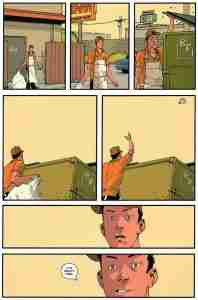 Invincible is a now ended comic series written and created by Robert Kirkman (right before he created The Walking Dead and right after his first series Battle Pope – yes that is a Pope that does Battle) first published by Skybound Entertainment.

The story is set on a world with Superheroes and centres around Mark Grayson, the as yet to get his powers son of the most powerful hero on Earth, Omni-Man. But as you can expect everything changes when Mark’s powers kick in in a big way giving him super strength, flight, invincibility (of course) and the potential that his father is actually part of a secret Viltrumite invasion here to conquer earth after massacring the Justice League/Avengers of earth – The Global Guardians.

Wait, What?
Oh yes, things get real bloody really soon in this book with that happening almost immediately after Mark get’s his powers. While you might be thinking DC or Marvel level superhero beatings this is that but from the same guy who brought you the Walking Dead. So when a fist goes through someone you don’t get a bloody fist out the otherside, you get entrails too. 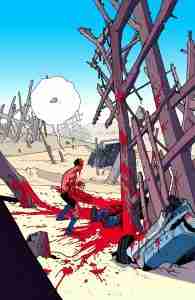 While Mark is the main character of the series and this is all about the hero’s journey on top of that we have superhero team dynamics, we have Mark’s dating life and the occasional trip into space that could last for months on end before returning to earth and finding out that time did not stop while he was gone and people continue to have lives. Robert Kirkman has famously said that The Walking Dead is a Soap Opera but with Zombies, so too Invincible has some of that same level complexity between characters.

How do I get into it?
Running from 2003 until 2018 Invincible ran for about 144 issues with most of the major arcs occuring up until around issue #124 but with a ton of references and recurring characters like Allen the Alien who originally would drop by and battle Omni-Man to test earths defences before that being shifted to Mark. While there are places where you could jump on, given the run is now ended it would be best to drop by your local favourite comic store and pick it up in a trade paperback or even hardcovers. 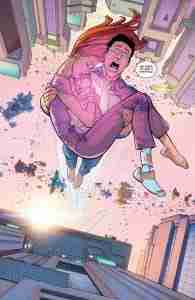 There is another way with Amazon Prime just recently debuting the Invincible animated series. This is not a dulled down version either with it carrying a mature rating (mostly due to heads exploding and brutal murders) but it does have some differences from the comics with some characters not able to appear due to licensing limitations where the comics were able to.

While we don’t know how in depth the animated series will be, the first 3 45 min long episodes do a fairly good job of replicating the story from the comics which is just a great reason to enjoy both.