Reboot. The most dreaded word in fandom. While not all are bad (Ocean’s Eleven comes to mind) for the most part they tend to drive away the most hardcore of fan from their once favourite characters. So what about the new Jumanji film? Good news… it’s not a reboot. And even better news, it’s really good. 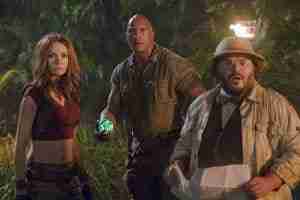 So it’s not a reboot? Well not entirely but it definitely has a feeling of a continuation more than a complete wipe of everything that came before. For anyone who hasn’t seen the original (you really need to work on your backlog this holidays), it goes like this. Young Alan Parson’s discovers a magic game in the forest called Jumanji. In the process of playing it he is sucked into the game and presumed missing for decades until a new family moves into his old house and finishes the game.

The film itself is not a reboot but a continuation of the last. With the board game being discovered in 1996 and taken home. Unfortunately board games don’t have the same appeal in the Super Nintendo age so the game evolves into cartridge form to compete. The new game being driven by curiosity claims it’s first victim before being put into storage.

And that is probably all you need to know walking in. While the original move brought a lot of CGI animals to the real world as part of wrecking havoc from the game the new update brings players inside of the world of Jumanji which is where it is assumed Robin William’s was pulled as part of the first movie. There are even breadcrumbs and references to back this assumption up. The latest movie gets reboots right by not rebooting at all but continuing and evolving the previous by not erasing the previous film but building on it. The result is a live action awesomeness with The Rock, the 11th Doctor Companion and GoTG Nebula – Karen Gillian, Jack Black and Kevin Hart which has a perfect balance of comedy and action while being self aware enough to make video game references with the players being trapped inside the game. 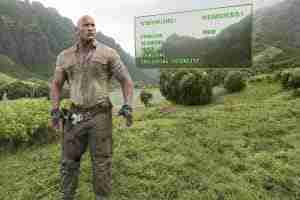 The video game’esque elements also make for some of the most clever plot points of the movie too as opposed to being cheap jokes or gimmicks poking fun at gamers.

So should you watch it? Yes. Very much so. While there are some american teen stereotypes you have to get through in the first small part of the movie you will be rewarded for your efforts. As soon as we enter the world of Jumaji you really won’t want to leave.

Plus, Karen Gillian dance battles are always a win.