If you are a hardcore Nintendo Fan you probably already caught the Nintendo Direct late last week and while almost everyone seems to be trying to pick-up the Nintendo Game and Watch as the Mini-NES for this Christmas, it was the Mario Kart accessory that topped our must have list. 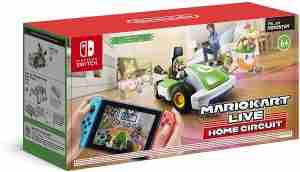 The trailer shown explains this pretty well but in short Mario Kart Live is a remote controlled Mario Kart toy with a camera built in that you drive using your Nintendo Switch. Think Quad FPV racing but for Remote Controlled Cars.

The twist being that you then lay out a course using gates that come with the car to create a race track that you can play through your switch like a real Mario Kart track. 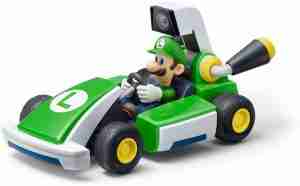 Gameplay also translates over to the real world too as when your kart gets hit your real world kart can come to a complete stop. But don’t expect a helpful little re-spot if you drive your kart too far off the track, there is no out of bounds here but we expect it will be strictly hard surface use, no grass.

Due out mid-next month for Australia you can pick-up either the Mario or Luigi themed set which includes a car (obviously) + a series of race track paraphernalia such as the gates you need for your track and some directional signs. Clearing out a track in your home is up to you. While the game will support up to 4 players, only 2 variation of karts are available at launch (which may mean more will be on the way) both of which will charge with the provided USB cable and presumably with your other Nintendo accessories as no chargers will be in the box. The sets will retail for $149.95 AUD and are already available for pre-order through your favourite video game retailer now for pickup on the 16th of October.