In case you missed it, it’s 2020 and you better buckle in because there is a TON of movies out the door for this year with DC hoping for it to be their decade as you come down from your Endgame high. With Shazam and Aquaman in 2019 the DCEU was looking pretty strong in 2019 but this year we are all about Harley Quinn and Wonder Woman.

Dropping overnight was the next feature-length trailer for the new Birds of Prey movie titled ‘Birds of Prey and the Fantabulous Emancipation of One Harley Quinn’ which is still in the running for the longest movie stub to add to your collection. Including a lot more of the Birds of Prey in this trailer than the last, we get to see some Ramona Flowers as Huntress action along with some Black Canary sonic scream.

You can check out the full trailer below but what you really need to know is, this movie is less than a month away with it hitting Australian cinemas first with a confirmed release date of the 6th of February. More than enough time for you to destroy some cheerleading pom poms to make yourself a jacket to check out the film opening night.

But what do you think? Are you looking forward to the DC movie slate in 2020? Are you hoping that the best parts of the new DC film slate continue past the rumored Flashpoint reboot? When will Ambush Bug get his big-screen feature film goddammit?! Let us know in the comments down below. 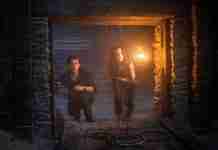