A beloved children’s novel has been given the Hollywood treatment by none other than Eric Kripke, creator of Supernatural. The House with a Clock in Its Walls is a lovingly crafted movie that will surely entertain fans of the Lewis Barnavelt books and young audiences generally.

The film was directed Eli Roth, best known for directing and producing Hostel. Don’t worry about the scare factor though. While there are some definitely creepy elements, the film does have a PG rating after all. There isn’t anything too scary or gory for younger viewers. 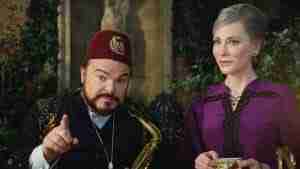 The opening scene provides a vignette of the 1950s that the story is set in, classic cars and all. But it is not long before the strange goings-on start to appear. The apparently idyllic town of New Zebedee is hiding something sinister beneath its charming facade.

Upon Lewis Barnavelt’s arrival, he is met by his bizarre uncle Jonathan, played by Jack Black, and is soon introduced to his neighbour, Florence Zimmerman, played by Cate Blanchett. Where Jack Black brings some wild energy to his performance, Cate Eric Kripke, Universal Blanchett is an indomitable, but not unkind, force of good. The repartee between the two characters is enjoyable to watch. An authentic performance from Owen Vaccaro as Lewis Barnavelt rounds out the trio nicely.

There’s plenty of action, adventure and magic in the movie. And also poop jokes. Thankfully the gag humour is only an occasional distraction from an otherwise well executed film. On the other hand, it is targeted towards a younger audience, so they will probably find it funny. It does contrast with some of the darker elements of the movie. 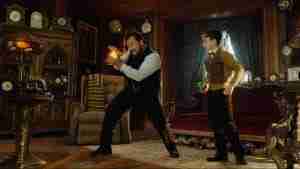 The film does deal with death, and demons, and creepy automatons, and a few other things besides. While none of it is particularly gruesome, you might want to keep it in mind if you’re thinking of taking the younglings along to a screening. It is a children’s movie, but your mileage may vary of course.

So should you go see it? If you’re a fan of the book series then yes, you’ll want to see how it looks on the silver screen. If you like gothic fantasy, or Jack Black, or Cate Blanchett, or have younglings to entertain over the upcoming school holidays then the answer is also yes.

The House With a Clock in Its Walls is playing in Australian cinemas now.