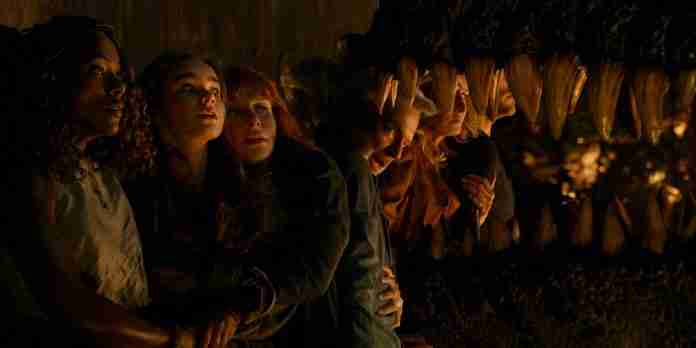 The age of dinosaurs can be defined into three eras of the Mesozoic. The Triassic, the Jurassic and the Cretaceous. The Stegosaurus was a native of the Jurassic era and was separated by about 80-90 million years before the Tyrannosaurus appeared during the Cretaceous period. There is more time separating the Stegosaurus and the T-Rex than there is the T-Rex and humans. But much like music artists using auto-tune, that did not stop the T-Rex from becoming the poster child for the decades long Jurassic Park. We aren’t sure Cretaceous Park would have lasted to see the latest instalment Jurassic World: Dominion. In cinemas from today the latest Dinosaur and human/genetic engineering cautionary tale is the bookend for a 29 year long franchise that began in 1993 when Richard Hammond brought experts into his new ecological park to get sign off from his investors. 29 years is a long time for spoilers but the short of it was Dinosaurs were able to be grown from their DNA thanks to genetic engineering.

Based on the books by Michael Crichton (author of a few other things you may have heard be adapted like Westworld) the story basically boiled down into Amusement Park where the attractions breakdown and start killing the guests… which between this and Westworld Michael Crichton was probably had an experience at Disneyland.

Back to the dinosaurs, so you might be wondering what do you need to know going in.

In the original Jurassic Park Ian Grant Palaeontologist, Ellie Sadler Palaeobotanist and chaos mathematician (chaos theory was very big in the 90s) Ian ‘Zaddy’ Malcolm were invited to preview the park before it opened. Being the highly valuable asset that they were they fell subject to some attempted industrial sabotage and theft if the Dinosaur embryos involving a pretty cool can of shaving cream but also had the park go dark.

The original Jurassic Park while it has been remastered still holds up in it’s original format with it’s original special effects (it is that good) it even spawned 2 sequels with the 2nd jumping from the tourist island to the research island Site B. Fast forward a few decades and the Jurassic Park “license” was renewed by the new version of the company that was involved in the original park and the site B recovery – InGen. The NEW Jurassic World park was build on the foundations and same island as the original Jurassic Park but with a few different missions including tourism and genetic research/engineering adding to the roster of dinos the very first original hybrid the Indominus Rex. The hybrid escapes and the park turns into a repeat of the original except now with Velociraptor trainer Peter Quill in the mix.

After the park is shut down Star Lord and his Guardians of the Triassic return to the park as part of a rescue operation to save the dinosaurs from a volcanic eruption and possibly one of the saddest on screen moments from the entire now 6 movie run. Turns out the dinosaurs weren’t being saved they were being captured for a new Dinosaur black market and when the auction goes badly they are let loose into the world to coexist with humans (including Emmet’s pet Raptor Blue). Oh yeah and the discovery that Hammond’s partner Lockwood had a generic copy of his deceased daughter living with him as his grand daughter.

Ok, got all that? We didn’t even get to the part with Nick Fury having his arm ripped off by a Raptor.

So what is the new film about? Set not long after the previous film dinosaurs are roaming the world, mostly in America. While a sanctuary had been developed in Italy a worldwide Dinosaur trade has been established with illegal dino-farms to generically engineered attack dinos being out in the world.

The latest film sees a return of the original A team from the first film as well as Andy Dwyer and team effectively into an A and B plot that meet up somewhere around where all the dinosaurs have been collected. Much like all the previous films this adds more dinosaurs in more places you have not seen them before and includes even more dinosaurs that have not appeared on screen before including some feathered ones.

While the special effects appear spot on for believing the dinosaurs are on screen the original film did this so well we are just accepting that as the baseline now instead of remebering the first time you stood up in your jeep on the grassy plains of Isla Nublar as you saw your first Brachiosaurus. Much like the previous films this one is very much driven by the action with the story being more loose signposts to follow with the exception that in this film and the original cast returning the amount of call backs to the original films are pretty high.

So should you go see it? If you are at all a fan of the franchise and have been following it through this is in a solid popcorn flick category with a lot of what you want but still leaving the series open to a return to Jurassic Park, but if you are new to the series maybe check out the original Jurassic Park and then Jurassic World at the very least before you decide to walk with dinosaurs.

Jurassic World: Dominion is in cinemas from June 9th across Australia