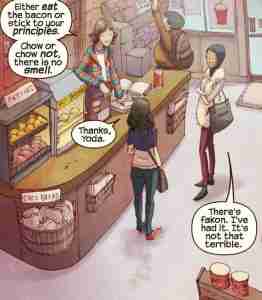 KAMALA KHAN is actually a completely new and original character who became one of the most well known Pakistani-American characters in the Marvel 616 Universe who also happens to have a Muslin heritage. She is an Inhuman, she loves Marvel Superheroes, she writes Fanfic and is basically what would happen if you took an MCU fan and put them in the 616. Wait, What?
Oh yeah, Kamala loves fan fiction and is a Superhero-superfan. Before being a superhero (and even after being a Superhero) the teenage Kalama is a massive fan of Superhero especially Captain Marvel/Carol Danvers to the point of being part of the Carol Corps (the Captain Marvel fan club). 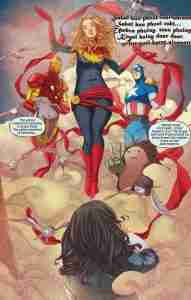 While only a little spoiler’y Kamala who learns she is an Inhuman when exposed to a Terrigen Mist (a gas cloud that can trigger powers in Inhumans or those who descended from Inhumans) in doing so she gained the power to shift the mass in her body, from shrinking and growing like Ant-Man to making giant fists the pummel evil do’ers.

She is also sworn protector of New Jersey, which usually consists of  stopping robberies at the Circle Q, helping out in the neighbourhood and the occasional stopping of a super villain before they destroy the high school (she even teamed up with Loki one time). 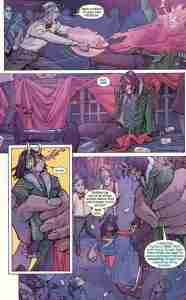 The best place to pick up Kamala Khan is at the beginning with G. Willow Wilson’s run that started in 2013 which you can either pick up as a trade from your local favourite comic book store or otherwise read on the Marvel Unlimited app as part of a monthly subscription.

The complete G. Willow Wilson run is actually broken up into 2 parts with #1 through to #19 being separate from the next volume of Ms Marvel starting in 2016 that goes from #1 through to 38 due to Secret Wars in 2015 that put a break in all Marvel books as the entire 616 Universe was destroyed (yeah look forward to that in MCU Phase 27). The 2 volumes are all part of the same run and the definitive Kalama Khan but she has also been apart of The Avengers and a teenage version with Miles Morales called Champions.

Get it if you like…
The Scooby Gang parts of Buffy, geeking out over MCU trivia, pop culture references, the Square Enix Marvel Avengers Game and Slushies from the Circle Q