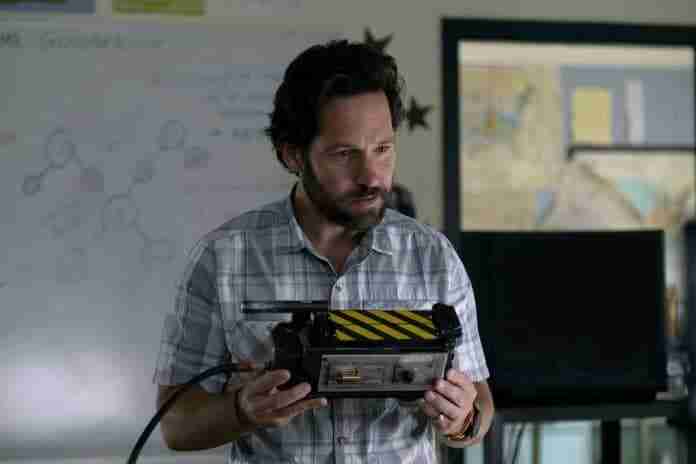 Are you troubled by strange noises in the night? Do you experience feelings of dread in your basement or attic? Have you or your family actually seen a spook, specter or ghost? If the answer is yes, then you have probably been waiting well over a year for Ghostbusters: Afterlife to hit cinemas. And from today, it is that day.

For anyone not familiar with the franchise that comes from a period of cinema sandwiched between Star Wars and Indiana Jones in 1984. Egon Spengler, Ray Stantz, Peter Venkman having been recently kicked out of the NYU offices and grants into parapsychology / paranormal research being suspended after witnessing their first ever Ghost sighting in the New York Library do what any other self respecting serious scientists would do, purchase a nearly condemned firehouse and establish themselves as paranormal exterminators aka Ghostbusters.

Armed with a converted hearse and some unlicensed nuclear accelerators strapped to their backs the trio (who soon become a quartet with Winston Zeddemore joining them) start to see some success as minor celebrities within New York which is seemingly having a ghost plague. This influx of ghosts actually was a sign of the coming of Gozer a major player in the realms of the paranormal who had their eye on the corner penthouse of spook central.

Ghostbusters was and is a cultural pop culture icon of a franchise to be ranked alongside Indiana Jones, Star Wars and many others. The Iconic sound of a proton pack charging up is well known to nerdom everywhere with the film having a mix of comedy, horror and brought something new, technology/sci-fi as a means to combat the unknown. It went on to spawn a sequel (and a remake that we might skip over for anyone not a fan of fart jokes) as well as TWO cartoon series, the Real Ghostbusters and Extreme Ghostbusters in the 90s.

Sidenote – Why the ‘Real’ Ghostbusters you may ask? The first use of the term Ghostbusters did not originate with the writers/director of such films as Caddyshack, Stripes, Twins and The Blues Brothers but actually a 1975 TV series that only lasted 15 episodes starring 2 paranormal detectives and a gorilla chasing ghosts you would expect to find in the first half of a Scooby-Doo episode. But we digress.

If you haven’t seen it, Ghostbusters is a necessary staple in your pop culture diet with not only some early ILM visual effects that were very impressive for 1984 but the script being infinitely quotable as delivered by peak Bill Murray. The 1989 film carried on the aftermath of the first with it more serving as an expansion to the Ghostbusters story picking up with the guys a few years later after going their separate ways.

Was there a Ghostbusters 3? Yes actually, Ghostbusters: The Video Game released in 2009 followed the 2nd movie and included many of the voice actors (including Harold Ramis prior to his death in 2014) voiced their characters in game as you played as a silent new member of the team joining just after the events of the 2nd film. The game while including video game writers also had the writers of the original film shaping the script making it a ‘spiritual’ 3rd Ghostbusters film (and a pretty great game that was re-released as a remastered edition in 2019).

Really briefly, there was also the 2016 reboot of Ghostbusters that did not follow in the same universe or act in canon in anyway. This is the one we mentioned with a lot of fart jokes, you can look up more reviews of it online but just know you do not need to have seen it for the latest film.

And this brings us to Ghostbusters: Afterlife which is set roughly real time after the events of the previous 2 Ghostbusters films. Having saved the entire human race from the apocalypse at least twice the Ghostbusters had faded into obscurity. While clips of them  from 1984 can be found on YouTube largely they are completely forgotten and no longer operating in any capacity. Ray has returned to Ray’s books, Venkman has been touring/teaching marketing, Winston has become a successful businessman and Egon retreated to the small town of Summerville, Oklahoma.

The film follows for the most part Egon’s grandchildren (the Science minded Phoebe and less so older Trevor) and daughter having come to Egon’s rural farm to settle his estate after his death. The Ghostbusters, having seemingly been forgotten even by their own families, only rate at a level of urban myth at least that is what seems to be the case when Phoebe finds a Ghost-trap and takes it to show the summer school science teacher – Paul Rudd.

Ok important stuff first, if you have not seen the first Ghostbusters films you will enjoy this but it is probably the difference between a 7 and a 10. This film is a continuation of the original 2 films in every way with the director of the film even being the son of the director of the original films (who also happened to visit set frequently during the filming of Afterlife). While this film can be a great introduction to the franchise there is a substantial amounts of references that a Ghostbusters fan will be excited in their seat for.

Visually this film delivers everything that you would expect for a 2019-2022 film with all special effects updated to a current day while still retaining all the look and feel of the original films. And as an experience the film dialogue feels very much set in reality much like the original Ghostbusters films with no slapstick here, just a lot of dry humour and some of the best jokes you are going to be repeating for the next few months to anyone who hasn’t seen it yet (it is hard not to love Phoebe).

So should you go see it? You know how some reviews will tell you a movie is the best movie and hype it up to seemingly unachievable levels and how we don’t do that? This is possibly the best movie we have seen in the last 12 months. There is some narrow margins for beating out some other films that have come out which are without question fairly epic, but this hits consistently the entire way through and taps into the original films to create what is definitely going to be to some, their most favourite trilogy of all time.

Ghostbusters: Afterlife is in cinemas across Australia right now