Final Space is an American animated series following the adventures of Gary Goodspeed as he serves out his sentence as the only prisoner on the Galaxy One with the only other passengers being robots, the ship AI HUE and his deep space insanity avoidance companion Kevin. Gary, who is carrying out his sentence for impersonating one of the Infinity Guard to pickup a girl (Quinn) in a Bar then destroying 90+ Infinity Guard ships, serves a lonely existence repairing satellites and being denied sweet sweet cookies. This changes when Gary during repairs finds the floating green creature he named Mooncake that is being pursued by the Lord Commander (voiced by the 10th Doctor, David Tennant) who is ravaging through the Universe attempting to widen a rift in space to access what is known as Final Space. As part of this the Lord Commander sends mercenaries after Gary including the Cat-man Avocado (who is actually trying to save his son Little ‘Cado from the Lord Commander), crossing paths with the Infinity Guard, Space Titans, Quinn, Alternate Future Quinn and… oh also Mooncake is a Planet destroying superweapon.

Oh yeah, big BFG vibes with Mooncake as Gary kind of bumbles his way through between awesome and having some hurt coins dropped in his feel wallet on the way to figuring out what Final Space is. But along the way we have Time Travel, alternate Dimensions, Alien Worlds and more. Imagine if you crossed Red Dwarf with Space Quest with Doctor Who with Star Trek but it’s all animated.

Season One and Two are currently on Netflix with Season Three playing on Adult Swim but expected to also appear on Netflix when it is complete. Each episode is the standard 22 minute long format with often times stuff happening during the end credits. But be warned Season One can take a little to get into before you realise this show is a lot bigger in scale than the interior of the Galaxy One. 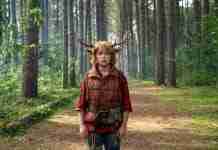