I know what you’re thinking; zombie movies have been done to death. Sure, we have Resident Evil, 28 Days Later, Warm Bodies, Dawn of the Dead, and a myriad of others. Anna and the Apocalypse is different. This is a Christmas movie that is equal parts High School Musical and Shaun of the Dead. 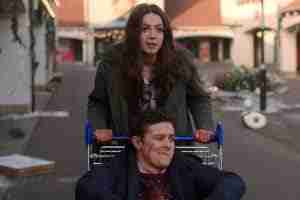 Buckle your seatbelt and straighten your klaatu barada necktie, mild spoilers ahead.

The film starts innocuously enough, we see part of the town of Little Haven in Scotland while Anna is on her way to school.  It doesn’t take long for the beat to pick up with ‘Break Away’ and later ‘Hollywood ending’.

There’s quite a few comedic moments spread throughout the movie, especially when the zombie apocalypse really gets going. There’s an obligatory rap ‘The Fish Wrap’, as well as a very inappropriate number ‘It’s That Time of Year’.

There’s still a couple of twists before the ending that I won’t spoil for you. Suffice to say that there’s something to the story besides the zombie horde. This is a zombie movie however, so there’s still plenty of gore and decapitations to keep an eye out for. Anna and the Apocalypse does a good job of balancing the zombie menace against the catchy tunes.

So should you see it? If you’re a fan of Shaun of the Dead and/or Warm Bodies, High School Musical, or in search of an alternative Christmas movie, then absolutely yes. It is an enjoyable watch.

Anna and the Apocalypse has limited screenings  at Dendy, Event Cinemas and select independent cinemas across the country. Check your local flicks for screening times.