Not satisfied with showing readers how cool Greek Mythology is, hard working author Julian Barr is all set to release a series based on Norse Mythology. Keep an eye out for Tooth and Blade in April 2019. In the meantime, take 5 with an itinerant bard.

What are you watching right now? I just finished binge-watching Brooklyn Nine-Nine and am now catching upon Doctor Who. Love Jodi Whittaker’s take on the Doctor. I’m also reading Lian Hearn’s Tales of the Otori. Bloody fantastic series, a great example of historical fantasy done right. 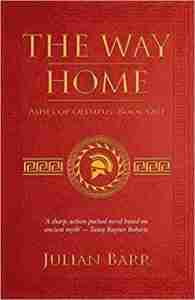 Who or what is The Way Home (Ashes of Olympus)? Why is it important? The Way Home is a YA historical fantasy based on Greek mythology, set during the aftermath of the Trojan War. Our hero, Aeneas, is nineteen years old. When the Greeks slaughter the royal family, it’s up to him to lead his people across the seas to find a new homeland.

It’s a swashbuckling adventure in the tradition of Clash of the Titans, a refugee’s story set in a world of gods, monsters and magic. The sequel, The Ivory Gate, will be released in 2019.

Apart from your book what should everyone be looking out for in local Australian Pop Culture?  Tansy Rayner Roberts is a fantastic author based in Tasmania. She has just relaunched her fantastic Creature Court trilogy along with a new prequel novella. If you’d like to read a story which combines pagan festivals with the shape shifters and the roaring twenties, check it out!

My friend Felicity Banks also recently launched her new fantasy series, a pirate’s tale for middle grade readers. The first book is called The Monster Apprentice—a great book for kids. I also just finished reading the comics Ink Island and Eternal by Australian indie creator Ryan K. Lindsay, and they were really engaging. His writing reminds me of Neil Gaiman. 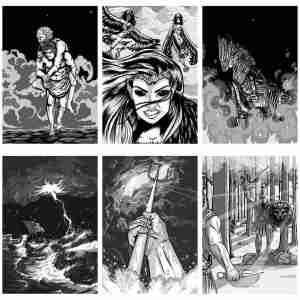 Major prediction for Pop Culture 12 months from now?  Long-term, I think VR is going to go more mainstream—it’s already on its way in gaming, but I suspect more and more storytellers outside the gaming industry will start to experiment with the medium as the tech becomes more accessible.

In terms of TV, I also suspect that as more streaming services emerge, Netflix might not be quite so omnipresent.

Best last thing you ate?  My wife makes one heck of a lasagne, but I devoured a really good Thai green curry recently—just the right combination of spices!

And that’s 5! The Way Home is available from Amazon in digital or print formats. Keep yourself in the loop by checking out Julian on twitter and facebook. Don’t forget to keep an eye out for Tooth and Blade, coming April 2019.

So You Want to Start Reading Japanese Light Novels?