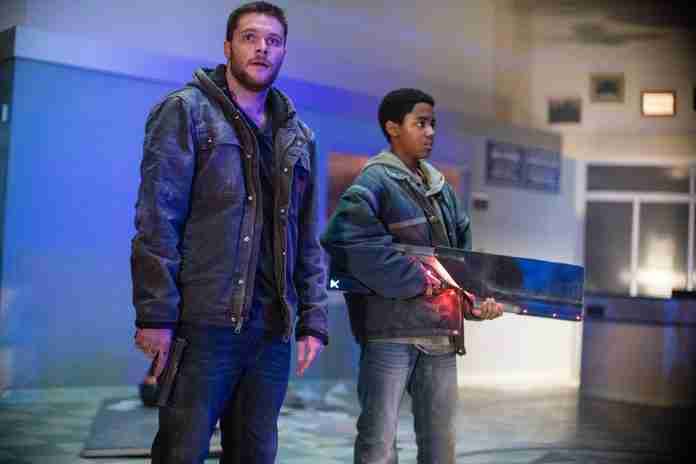 With everyone from the Chitauri to Skeletors minions turning earth into a war zone bringing their alien ray guns through portals over the years it was only a matter of time before someone tripped over some of that firepower. What would happen if a regular someone unwittingly came across a treasure trove of alien technology? In the new film KIN we get to find out.

KIN follows the young protagonist Eli who in searching for scrap metal to make some extra coin comes across the aftermath of an alien firefight in an abandoned building. With heavily armoured bodies lying everywhere something happens when Eli touches one of the weapons lying on the ground. After Eli finds the alien weapon it’s not until his ex-con brother Jimmy is released from jail that things start to get more exciting. Trying to go straight Jimmy’s path takes a turn almost immediately as he also owes protection money for his time in prison to Taylor/James Franco which he does not have. On the run Jimmy and Eli head across the American mid-west with pursuers in tow. This film might seem like an low budget indie with the limited sessions and short time between the trailer and release it is definitely not. KIN boasts a fairly well known cast with Dennis Quaid, James Franco, someone we won’t mention until the end of this review but it’s not really a spoiler and Zoe Kravitz (from X-Men First Class and Fury Road) on top of being produced by Stranger Things alumni this film has a lot going for it on who is involved alone. While the story has some elements we have seen before, most recently the MCU one-shot Item 47, KIN is definitely it’s own movie. While most of the film is centred on the brothers and their escape, the unknowns of the alien hardware – where did it come from, who made it, how does it work, etc are DEFINITELY worth a movie on their own. The alien technology, while pretty cool and adding some top notch special effects to the film, takes a backseat to the main story and is only used when it can help the plot and not used as a crutch to help the movie progress. So should you go see it? Without spoiling it, yes. If only because everyone who sees it will want this film to get a sequel. If you are a fan of movies like the Last Starfighter or Stranger Things this film ticks a lot of the same boxes. With films like Upgrade coming out of nowhere to be one of our favourite films this year, smaller production films like KIN can slip by your radar but you should make sure it’s on your watch list. Oh, and also keep an eye out for surprise Michael B Jordan.

KIN is in Cinemas around Australia right now.