Home Read Comics Creator Spotlight: 5 Questions with I Am Ned’s Max Myint
Facebook
Twitter
Pinterest
WhatsApp
In a post World War IV intelligent Zombies have taken over and only one man inspired by Ned Kelly has built himself armour to stem the tide. Want to know what happens next? Then take 5 with creator Max Myint and find out more about I Am Ned.

What are you [playing/reading/watching] right now? Currently in the middle of reading Kill or be Killed, Brubaker is eloquently savage and I LOVE it. I’m also on a total retro gaming addiction, currently playing Final Fight 2 (Japanese version). With my busy schedule I’ve been enjoying playing some old SNES games when I need a quick break. Nostalgia is delicious.

What is [thing]? Why is it important?  I AM NED is a comic series that’s essentially a modern reboot of the Ned Kelly mythos with a more relevant frame of reference to our Pop Culture today. The Story takes place in a dystopian future where Australia has been ruled under an intelligent zombie regime for some ten years. People don’t remember what life used to be like. They’re running scared, constantly being hunted by Harvesters for Human Farms to feed their hungry zombie citizens. Humanity has essentially resided itself with giving up on any kind of hope. The loyalty of the zombie citizens are commanded by the regime’s heavy use of propaganda and their control of all supply of food.

A lone man finds his motivation in history, and builds armour inspired by the late Ned Kelly to launch a rebellion against the zombies. Folktales of him spread amongst the survivors. No-one knows his name or even if he exists – they call him NED. His presence inspires hope again and humanity finds empowerment through his actions. Together they will rebel to give Australia back to the people.

I wanted to create this because Australia has no superheroes or figures that people really point to that represents us in Pop Culture. There’s just ZERO presence to that regard. I’m personally sick of all the cheesy presentations where an Australian character is sidelined with a ridiculous gimmick like boomerangs or just looks plain goofy. This is why I chose this project as my first character to release.

Ned Kelly is uniquely Australian and more than that, it’s something that really happened, it’s believable – no other country has something as unique as that. So why not a modern update? To me it seemed like a natural thing. The story of I AM NED, really echoes a lot of the essence of the Ned Kelly mythology, and so by harkening back to what really happened in history, I hope that people who don’t know about it will want to read more about it. To zombies he’s a terrorist. To people he’s a freedom fighter.

So let’s tell a heightened story that feels relevant so people can relate, that’s uniquely Australian, with a character that looks credible and bad arse. Ned has no powers, just human will and tenacity. Beneath the veneer of the action and gore, there’s emotion, there’s a deeper story. There’s a lot of topics we touch upon that hopefully will connect with people. It’s not just NED, it’s our people too and their perspectives and struggles. We really examine individuality, ownership and ultimately what happiness means.

In many ways this is meta, there are parallels to reality. NED gets people to believe in hope to restore their presence that’s been taken over by the zombies. Similarly with this comic, I want people to be entertained, get excited, get inspired and believe in our own Superheroes and characters. The representations of Aussie characters so far ARE zombies, shells that are just intended to mimic Aussie values. I want people to get behind NED, and I want our own heroes to have a greater voice and presence not just here, but beyond Australia as well.

Apart from your [thing] what should everyone be looking out for in local Australian Pop Culture? Get onto www.ownaindi.com, this is an amazing marketplace for people out there who want to dip their feet into the Aussie indie comic scene. There are some great indie creators out there putting out awesome art and a variety of unique stories, as well as heavy hitters who have done work for a lot of major overseas publishers.

The indie scene is often something you have to really go out of your way to find just because it can be rough out there in terms of exposure. So I absolutely love how Ownaindi presents this hub for newcomers to open their eyes, see what’s out there and connect! We do have what it takes to have a larger presence, which is why making that connection is such an important step for the future of Aussie Pop Culture. 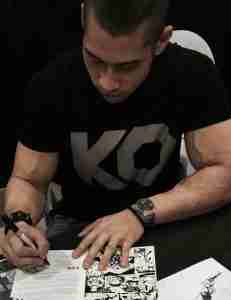 Major prediction for Pop Culture 12 months from now? I hate to say this because I love DC, and they did succeed with Wonder Woman. But I think the DC Cinematic Universe as a whole will slowly find a way to present a soft reboot of its major characters to undo the damage of Syder’s failed vision. If they attempt to do movies like their Elseworlds stuff it’s either going to be genius and the future blueprint for the longevity of cinematic comic brands, or it’s going to cause mass confusion because perhaps the general audience is just not ready for it.

These days people are huge fans of continuity because of the appeal for a potential crossover, so commercially speaking DC will probably want to get their universe rebooted to achieve the same success as Marvel. Here’s to hoping that DC can get their act together, it’s a shame to let such iconic and legendary characters not get their just due cinematically.

Best last thing you ate? What I really wanted was steamed hams, but I settled for a Philly cheesesteak burger…with crispy maple bacon added. Mmmm…now that is a tasty burger.

And that’s 5! You can pickup a copy of I Am Ned (and maybe get it signed by Max) at Gold Coast Supanova this weekend in Artist Alley! Not going to be at Nova this weekend? Pick it up via the ownaindi online store where you can also order that awesome I Am Ned Maquette. And for more I Am Ned news follow them on Facebook.