For many Lara Croft was the first franchise game character. Combining the best parts of Indiana Jones with platforming, shooting, death traps and dinosaurs to be one of the longest running and most successful single player gaming franchises. Tomb Raider is more than just a game, it is a timeline for modern gaming with the development and improvement of the games over their lifetime.

In 2013 Tomb Raider was reborn after the studio was purchased by Square Enix (minds behind the Final Fantasy series amongst other things) and Lara was given a new origin. This is an important time to call out because this is where the new film takes place, borrowing heavily from the re-invented Lara of the game universe (which has a 3rd title due for release later this year).

We start out with a Lara not living in a mansion and living off a wealthy inheritance but as a more humble introduction with her father missing and long presumed dead. After 7 years of resistance Lara finally gives in to sign the papers accepting her father’s last will and testiment. 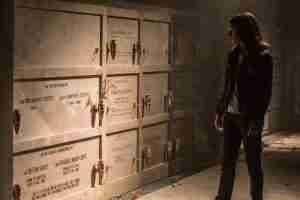 It is from here she learns her Father’s true story and breadcrumbs leading to where he went missing, a remote island in the devil’s triangle off of Japan. Lara, scrounging what she can heads to find a boat and someone to take her to track down her father who it seems went missing looking for something of supernatural origins.

This is about where we depart and yet somewhat follow the first game of the rebooted series. For anyone who has played the game they will know how rich and involved it is with massive set pieces and multiple combat missions with 8-15 hours of gameplay. While this is a massive ask for any film to follow there are definitely elements of the game that are borrowed to fit into the film without feeling forced.

There are a number of action pieces which are not Michael Bay levels of over the top but definitely frequent throughout driving the story. The film seemed to compliment the game well with it being the starting point for Lara as opposed to the racking up the body count Lara we have seen in previous films. 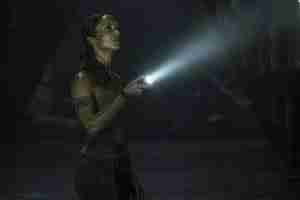 So should you go see it? Well, yes. Let’s face it games to movies are a pretty low bar and the failures far outnumber the successes. But this new Tomb Raider gives us the same level of optimism for the series that we had when we first played the rebooted game. We thought that Alicia Vikander was great in the Man from U.N.C.L.E and as long as she is onboard for more films in this franchise (which is clearly set up) we are completely on board.

Tomb Raider is in cinemas across Australia now