Do you find escape rooms too small? Have you ever wanted a Cannonball Run style adventure with your friends? Racing across the city cracking riddles and driving to secret locations? For the Creator Spotlight this week meet Serge Zubaryev who is behind the Urban Quest Insomnia Race, a city wide scavenger hunt that does just that in Melbourne.

So atomic batteries to power, and turbines to speed as you take 5 to learn more about the mind behind the race! 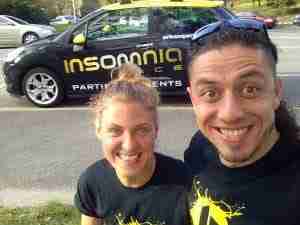 What are you reading/watching right now? Just finished watching the one and only season of OA. That truly impressed me. It’s a definite top on my TV show list.

I haven’t read any books in ages, just too busy and never in the right head space for that, unfortunately.

What is The Resurrected? Why is it important? Insomnia Race is basically a night time car based team competition full of mind-bending puzzles, tricky challenges and crazy flash mobs. One may say it is like a grim mix of an escape room and a car rally but way more extensive and out there in the night, which is actually not far from the truth, but the concept has been born over 10 years ago in Eastern Europe and has been gradually evolving into what Insomnia Race is now.

Held on selected Fridays starting at 8pm. Everyone is welcome to join as there are 2 levels of difficulty to choose from depending if you are new to the game or a seasoned player: Open and Pro Leagues. Finishing in a pub with an award ceremony where we announce the results and everyone can share their experiences for the night over a drink or two.


Unlike one off escape rooms, Insomnia Race is an ongoing competition; on selected Fridays there is an entirely new set of challenges to test your mental acuity, orienteering skills, and teamwork. No two events are the same!


Apart from your comics what should everyone be looking out for in local Australian Pop Culture? There are a few pretty decent Escape Room experiences out there, as well as the ones that should pick up their game otherwise they face a soon extinction as just being in the popular industry is not already enough. I think Boxwars are pretty cool and unique in what they do. Break Room would be the place to check out too.

Major prediction for Pop Culture 12 months from now? I am pretty sure everyone should be on the lookout for new technologies penetrating the industry. I think pretty soon we will see a massive surge of AR and VR experiences along with the existing ones.

Best last thing you ate? I just had my usual toasts with bread and butter and a big mug of coffee for breakfast.

And that’s 5! The next race is planned for February so you can head over to the Urban Quest official pages to find out more. New teams will need to start in the initiation event but after that you can compete in the leader board across the year.