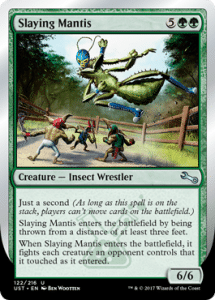 13 years after Magic The Gathering released their last un- card set, Unstable is on its way to turn your magic games upside down, sideways, and maybe even some non-euclidean directions.

But enough silliness for a moment, why should you care about this new mtg set? If you missed either of the previous un- sets, this is your chance to revel in the strangeness of a casual card set where the main design concern seems to be how much fun it will be to play. Whether you have been playing magic for a month, a year, or a decade, there’s fun to be had for everyone- although knowledge of the game’s history will help with the ‘in-jokes’. 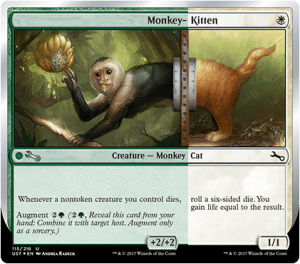 What’s in the set?
Augment
The creature-focused mechanic in the set. It’s somewhere between an enchantment and a double-sided card, and can lead to fun combos like the Monkey-Kitten seen here and the monstrous Multi-Headed Pony.
Players are sure to have fun assembling strange combos of never-before-seen creatures to dominate the battlefield. 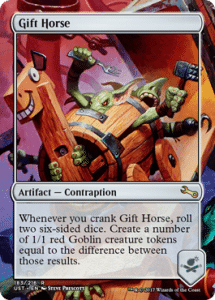 Contraptions
Contraptions are the biggest thing so far for this set, with 12 contraptions revealed and at least half a dozen cards that interact with them. If you’re wondering, a contraption is a new type of artifact card that is part of a separate deck that does something when you ‘crank’ it.
I, for one am looking forward to trying out this new card type at release events. 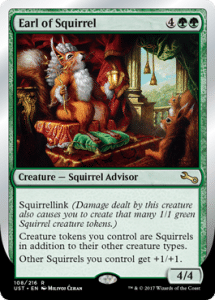 Squirrels
Nestled in black and green you’ll find a mob of squirrels. With almost as many squirrel cards revealed as those that already exist, a squirrel deck doesn’t seem like such a zany idea after all.

Tribes
While the familiar goblins return (albeit in unfamiliar ways) there are a variety of different tribals so far revealed. Cyborgs, Spies, and Ninjas appear alongside the already mentioned Squirrels. I forsee a few interesting casual decks in the not too distant future.
Keep an eye out for more card previews in the lead up to the set’s release here.
Unstable is available December 8. Keep an eye out for events at your local gaming store.