This week we talk to Perth Game Developer (when he’s not too busy taking his game to E3) whose Cowboy Bebop inspired Desert Child will make you say shut up and take my money! Lucky it just hit Kickstarter to take it to release for you to do just that.

So kick back and take 5 and learn more about Desert Child’s Oscar Brittain!

What are you playing right now? I’m travelling at the moment, so I’m just playing my PS Vita. Right now, I’m playing Castlevania: Symphony of the Night for the first time. It’s really engrossing! It’s like watching True Blood or something, it’s so cheesy! Haha. It’s kinda frustrating though, so if I start to rage I’ll swap out for the original Driver to stop myself going mad. 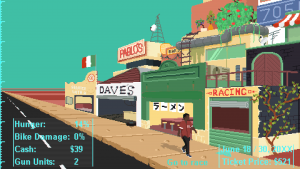 Driver still has my favourite opening level ever for a game. If you don’t know it, look it up. It’s like the most punishing tutorial ever made.

Who or what is Desert Child? Why is it important? It’s this racing RPG where you race hoverbikes all around the solar system. I wanted to make a sci-fi game that was more how I want the future to look. It’s kinda anti-cyberpunk, more like Cowboy Bebop.

It’s all about earning enough money to keep doing what you love. The main character has to skip meals and run drugs to be able to upgrade his bike. I wanted it to be gritty, but super colourful at the same time, like a deadly fire at a skittles factory. It’s kind of a reaction to sci-fi being a bit of a pastiche of 80’s movies nowadays.

Apart from your game what should everyone be looking out for in local Australian Pop Culture? Aw geez, I don’t want to play favourites, haha. I’ll name a band instead. Pow Negro is my friend’s band, they’re super duper. He raps like Ol’ Dirty Bastard, and the band sounds like The Residents. I’m real hyped on their stuff. 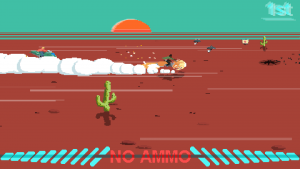 Major prediction for Pop Culture 12 months from now? I think that early 3D, PSone-era graphics will become cool and retro. You know, where everyone’s face looks like their dad was a brick wall.

Best last thing you ate? I’m a real bad cook, so probably Blue Cheese and Eggs from The Cool Room. Don’t go there. It’s already too popular and I can’t get a table on Sundays.

Oscar’s Desert Child is on Kickstarter today for you to back and be first in line to get it!