If you happened to be walking around Nerang on the Gold Coast last week, you may have come across a few people wearing strange goggles, carrying small quadcopters on their backpacks and talking about lap times and power loops.

Don’t worry, it was perfectly normal! You just crossed paths with quadcopters pilots who came to Queensland for the 2017 edition of the Australian Drone Nationals, an event sponsored by UAVAIR, CASA, MAAA and the Australian Defence Force.

This year was the second time that the Australian Drone Nationals were organised by the AFVPRA and Mark Cocquio. Everyone seemed to be happy with the organisation and pilots had a great time competing as well. The audience could even watch races and freestyle flights on screens if they didn’t own FPV goggles.

In the lead up to last weekend, between May and June, quad (or kwad) pilots from each state of Australia could submit to qualify as a FPV (First Person View) pilot for both freestyle and racing categories. If you were selected by the panel, on your racing and/or freestyle, you were then eligible for the Nationals (in one category or both).

Kwads races consist in competing against other pilots (four pilots per a single race), following a track with obstacles to go through and around such as towers, flags and gates. In freestyle, you are alone on the field. You are given a set amount of time during which you are free to fly in a limited area syncing your tricks to a music you picked in advance.

Now that you know what I’m talking about, let’s move on to the event itself!

Before the event, a crew of volunteers as well as the 20th Surveillance and Target Acquisition Regiment met on the field to set up the track.

Trials took place on opening day. Like in Formula 1, FPV pilots need to practice on the track before the big race. When it rains, pilots can not fly their kwads, as they are rarely made to be waterproof, and this is what happened that day. Luckily, around 2pm, clouds disappeared and trials started. Everyone was then able to fly two to three batteries on the track.

Day 2 was qualification day brought perfect weather and pilots were ready to compete. To qualify for the finals in racing you had to be one of the best 32 lap times out of 64 pilots. Pilots were divided into 3 groups and would fly in smaller groups of 4 for each race. Each pilot was allowed to fly 4 times, which means 4 different batteries. Equivalent to 16 laps on the track.

It quickly became obvious the best lap time was under 20 seconds with the average lap time of 24 seconds. Thomas Bitmatta, who won the 2016 Nationals event, achieved the best time of 19.877 seconds with the 32nd pilot scoring 27.355 seconds. In freestyle, all of the pilots would fly one battery on Saturday and another one on Sunday. Judges would give marks based on 4 criteria and the total of these three marks would be added to give a pilot his rank.

Rules had changed for the finals. Four pilots would still fly at the same time, but only the first two pilots to go through the final gate after 3 successful laps in a row would qualify for the next one. This would continue until the final race.

After tight qualifications, Thomas Bitmatta, Ross Kerker, Sam Helps and Owen Littleton were the four remaining pilots competing for the first place. The final race would actually be divided in three consecutive races to reduce the influence of luck in the results. For each race, the 1st pilot to complete their three laps would earn 5 points. The amount of points would then decrease according on which position a pilot completed the track. Without any surprise, Thomas Bitmatta managed to win all three races (with a total of 15 points, winning himself $3000). Ross Rekrek placed second (7 points, $1000) followed by Sam Heeps (6 point, $500) and Owen Littleton (5 points, $250).

So, have you missed this event ? Hopefully you were there and experienced it but if not, I’ll be glad to see you there in 2018 as we watch flights on screens, wear strange goggles and maybe even strap drones to your backpack!

Check out the video for a quick summary of the event!

Remember, racing quads can be dangerous if not used by a trained pilot and CASA laws apply to anyone wanting to fly their quad in Australia. Got a tip about an upcoming race in Australia or a question about Drone Racing ? Ask in the comments down below or drop me an email 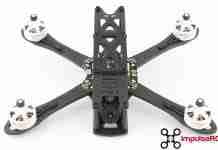 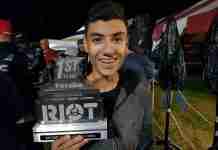 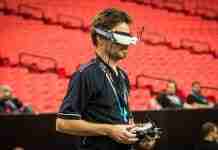 Have you heard of Chad Nowak ? 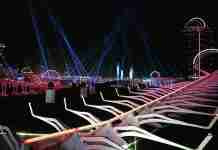