If you caught our Comic Pull List for this week you were probably looking forward to dropping into your favourite Comic Store and picking up a copy of Batman #21 today (or this weekend).

We have spoken to a few comic stores today and learnt that Batman #21 has been largely delayed for Australia with the fancy Lenticular cover not being shipped outside of the US and Canada at all.

Some retailers have managed to get their hands on the limited amounts of the regular edition as scheduled, with the remainder expecting it next week (with Flash #21 being part 2 also delayed for those stores, expect similar availability on its Lenticular cover variant too). 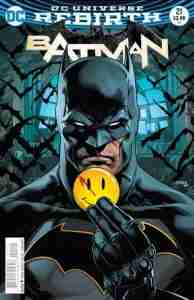 What does this mean for getting your hands on this variant in Australia? Right now you have two options:

Either way, we are expecting the limited availability of this cover is going to mean some big prices if you try to hunt it down later.

Not really the news you were after for New Comic Book Day but hopefully we can save you some rushing around as you look for the next part of the Rebirth main storyline.

Update: Kings Comics in Sydney look to be one of the few with the variant in stock this week. If you are quick you might be able to still pick it up off their website