We got a leaked trailer version a few days ago but overnight out of Star Wars Celebration we get the official trailer for Battlefront II and a whole lot more details.

Only a few seconds longer than the leaked version but does give more of an idea of the famed single player campaign that the new game has promised. Following the events of Return of the Jedi after the second Death Star’s destruction, the campaign largely lets you play as an elite Imperial special forces commander Iden Versio.

More importantly as announced at Celebration, the single player campaign story is completely canon coordinated with Lucasarts and supporting the new Star Wars ‘Battlefront Inferno Squad’ novel (out on July 25). Saying this game is canon is a bigger deal with you learn that the campaign will occasionally let you jump from Iden to Luke Skywalker and Kylo Ren.

Gameplay-wise a lot of the parts that made Battlefront great are still there, 40 player ground battles and 24 player space fights, but the locations and maps are what made the first game so epic. Kicking it up a notch with modes like taking down Imperial capital ships in space and spanning all Star Wars eras from Episode One Theed Place to a hive of scum and villainy Mos Eisley to riding a Taunton in Episode Five to the Last Jedi. A new edition is 2-player offline co-op is also added for PS4/Xbox One editions.

For anyone a fan of the X-Wing PSVR DLC, unfortunately, there is no mention of VR-based missions (so far).

One last addition is the addition of player classes. 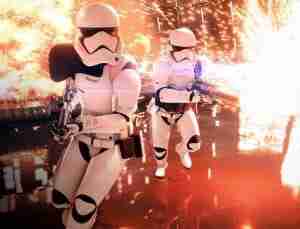 While not a great deal of information available during the Celebration panel this was clarified with allowing for Officer, Assault, Heavy, and Specialist classes with the ability to upgrade not only the troopers but the heroes as well. For anyone who has played the first Battlefront and been mowed down by Vader like they were holding the Death Star plans, the intention being the right squad of troopers could hold their own against someone like Maul.

Star Wars Battlefront II is released for Australia on November 17 for PS4, Xbox One and PC and for EA Early Access on November 9